This is my 58 gallon mixed reef which just turned 19 years old this month. The large hammer coral on the right is supported by a shelf I made several years ago which allows for easy fragging, which occurs about twice a year. 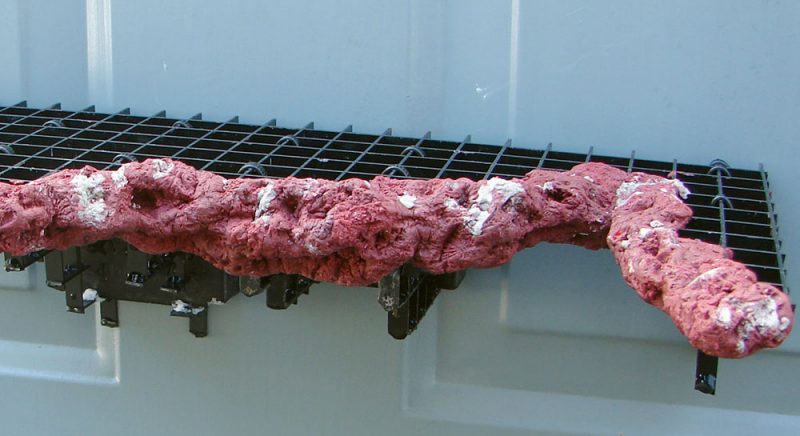 This is the shelf, which is made from egg crate and a two-part epoxy putty called Apoxie-Sculpt. The only visible part is the front edge, and is usually engulfed by coral within a couple of months after fragging. The egg crate is not visible at all. Holding the shelf to the back are 2 large magnets. Just to the left of the hammer coral is a frogspawn that is supported by a smaller shelf, which is also edged with Apoxie Sculpt. Come to think of it one of the rocks on the upper left is also a magnet rock which uses Apoxie Sculpt. 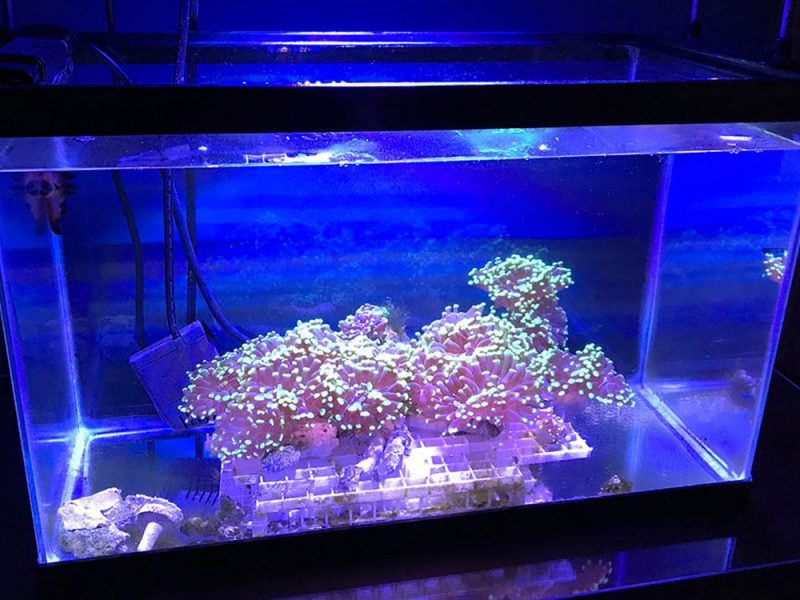 After fragging the hammer, I usually hold the frags for a couple of months (depending on how lazy I am at the time) in a simple 10 gallon tank, with the branches stuck into an egg crate box. No filtration, weekly water changes from the main tank. There is a chocolate chip starfish in that tank. I got a pair of harlequin shrimp last year, so I keep the starfish in the tank until feeding time. They do occasionally eat the hammer coral, but I have plenty so no biggie. I found out that they really like montipora cap frags. So don’t put them in your display.

Since this frag tank has become “permanent”, I didn’t want to look at the sterile tank all the time, so I decided to make something a little more interesting. I designed it in my 3D program and came up with this. The highest platforms need to be on the outer edges so the corals don’t get burnt by the Maxspect Razor light, the next level down is a little more centered to the light, with the bottom level being directly under the light but far enough away that it doesn’t get burnt. The structures will all be covered with Apoxie-Sculpt to make them look like rock, just like the shelf. Here is the 3D model design: 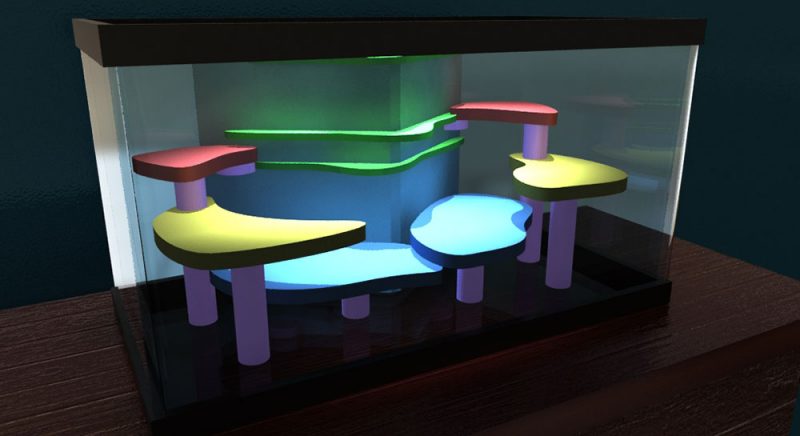 I used a top-down wireframe view of the model to print out a template that I used to trace the shelf shapes on to plexi. 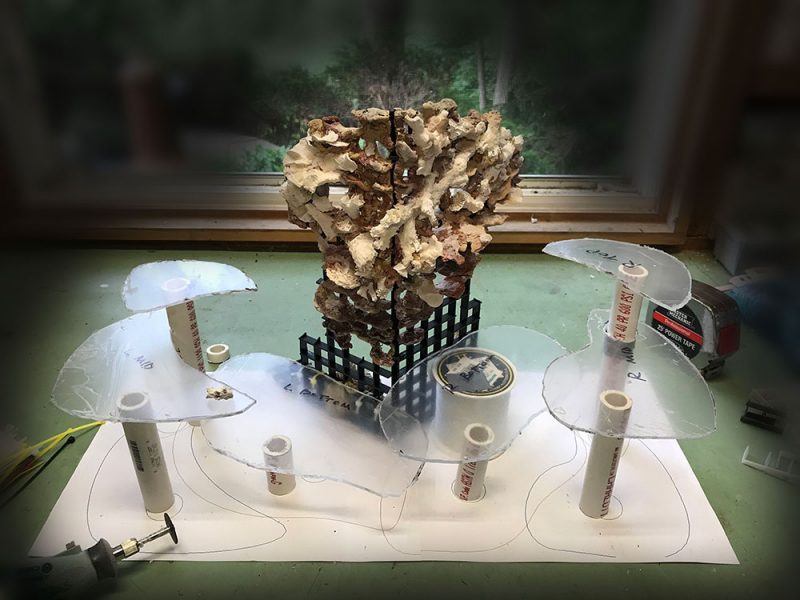 Then I cut out the shelves and supporting PVC pipes. The structure in the background was from a previous nano tank, and will be modified slightly. Its purpose is to hide the pump and heater which will be behind it. It will also have some gsp’s or other encrusting corals on it, which will hopefully not be eaten by starfish. The shelves still need to be drilled for hammer frags. You can see the printed template underneath everything. The last thing that I have done is to dremel the pipes to make some holes for pods, and just generally rough them up prior to the epoxy stage, which will be next. Wish me luck.

Finally had some time to work on the pillars that support the shelves. Got the shelves drilled and placed everything in a old tank to make sure it’s all working and fitting as planned. Still a fair amount of Apoxie® Sculpt work to do, but overall I’m happy with it. Planning on an Icecap 1K mounted vertically on the back glass behind the center unit, which will also hide the heater. 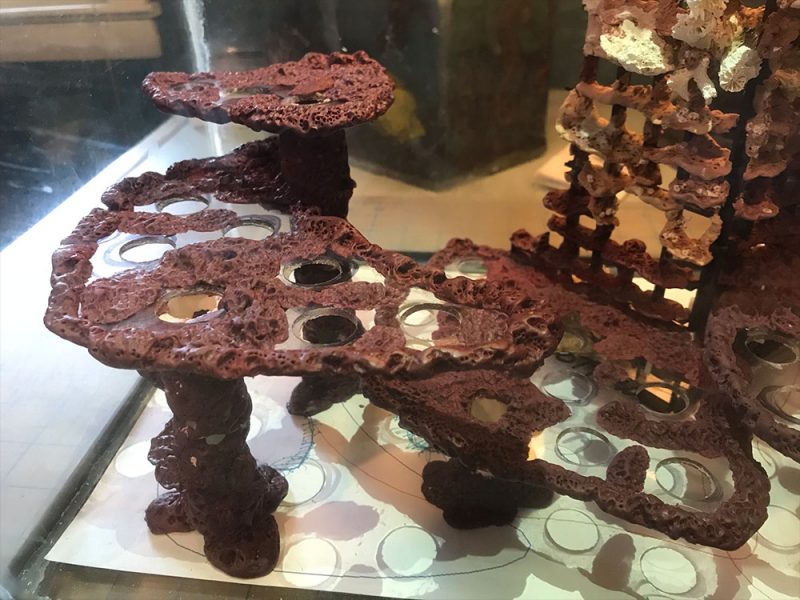 Note: the product I use for coloring and “sculpting” the PVC and the acrylic is called Apoxie Sculpt made by AVES STUDIO. It comes in many colors, which you can mix as desired, is completely reef-safe and cures underwater (if needed). The large frag shelf, which is made with Apoxie Sculpt, that appears early in this thread has been in my tank for 9 years with no issues. I also use it to mount frags sometimes.

So after all the work …..here it is. Time to get it wet and put it to use!
Here is the tank shortly after adding some corals. It will look better after they adjust to their new home. I also will also be adding some Green Star Polyps on the white areas of the center backdrop soon, which helps reduce the starkness. 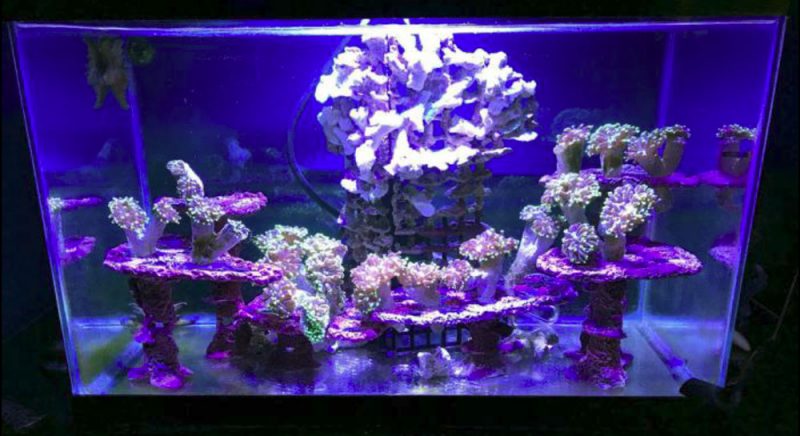